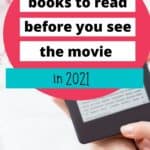 Well, if 2021 is anything like the past year, we’ll be binging a ton of movies and shows at home.

Many planned film projects have gotten called off or postponed. I’ll continue to update and revise this list when new information becomes available.

I’ll let you decide whether the following books are better than the movies.

Scroll down to the end of this post to get a free list of printable “Book Club Questions To Use With Any Book.” Plus, get access to our Resource Library with book club questions for some of our favorite books. Plus, you’ll get sent a weekly email with a list of curated book deals.

Movies and Series based on books scheduled to air in 2021

This period piece focuses on two families, the Bridgertons (and their eight children) and the Featheringtons. Critics compare it to The Gossip Girl. It’s produced by Shonda Rhimes and includes Julie Andrews in the cast.

This show officially dropped on Netflix on Christmas 2020.

This is an unbelievable true story about a group of women in the 1920’s who worked in factories using a new substance, radium, despite its horrifying side effects.

Check out this Young Adult adaptation here For more young adult versions of popular books, you may want to read this post.

(3) The Dig by John Preston: Netflix

Based on true events, this book tells the story of a woman who discovers an ancient burial ground on her farm.

This book follows a friendship told over the course of thirty years and will stick with you long after you’ve finished reading it.

Watch it on Netflix (beginning February 3, 2021). It stars Katherine Heigl and Sarah Chalke.

Get the book on Amazon here and check out its sequel, Fly Away .

Get it on Amazon here.

October 2021: in theaters and HBO Max

The film is based on the 1965 science fiction novel about a young man and his family who relocate to the planet Arrakis. The film (available in theaters and on HBO Max), a two-part series, stars Timothée Chalamet, Zendaya, Josh Brolin, Javier Bardem, and Rebecca Ferguson. A companion TV series will air on HBO Max.

Get the book series on Amazon here.

(7) The Nightingale by Kristin Hannah

This book is about two sisters involved in the Resistance during the German occupation of France.

The film is set to release December 22, 2021. It stars real-life sisters Dakota and Ella Fanning.

Books Coming to Film Sometime in 2021

We don’t know exactly or sometimes very many details, but here are the books supposedly coming to life and our homes this year. I’ve made it easy for you to find these books. They’re all listed in my Amazon shop.

To get the Friday Favorites email, sign up below. Not only do you get exclusive access to everything in the Resource Library (printables, book club discussion questions, etc.), but I also share the newest blog posts and my favorite things from the week.

Audiobooks: the best Memoir and Autobiographies