I remember the day my future husband and I decided to get a dog. Sitting outside at one of our local brunch spots, we seemed to be the only couple without a pup. Casually mentioning that I wanted to get a dog one day, he suggested that we get one together. It didn’t take long for me to tell him about my dream dog, the French Bulldog.

At the time, hardly anyone had a French Bulldog, not even in Manhattan. Gasp. Nor did people even know what one looked like. I first learned of the Frenchie years before, when flipping through a magazine, I found a photo of a celebrity and his pet French Bulldog. It was love at first sight for me.

And, so soon after, we got this guy: Baxter, the coolest looking dog who ever lived. 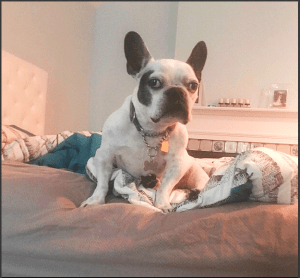 People stopped us on the street daily. Passersby called out his name, without knowing mine. He was a celebrity magnet and a celebrity in his own right.

Check out my free downloadable checklist on questions to ask your breeder at the end of this post!

The Frenchie Becomes the It Dog

Flash forward to more than a decade later and the French Bulldog is everywhere: on clothes, bags, movies. This year, the French Bulldog is expected to take the top spot as Britain’s most popular breed, with a staggering 3,104 percent increase since 2007 (one year after we got Baxter) and continues to be the most popular breed in New York, where I live.

When our poor dog passed away this year, we knew it was only a matter of time before we got another French Bulldog.

When You Trust the Wrong Breeder

I’ll admit it, we got Baxter from pretty shady circumstances, although we didn’t know it at the time.

What we learned during a Google search years later, shocked us: Our breeder wasn’t a breeder at all, but a broker. She got her puppies from puppy mills in Russia. The puppies, taken too early from their mothers, were shipped on a plane to the Poconos, Pennsylvania, where our breeder passed them off as her own. We were lucky. Our dog was healthy but many of the puppies she brokered died en route or soon after, while others suffered from various diseases. The government eventually caught up with her, fining her and ultimately, putting her out of (her lucrative) business.

If you know me from my blog, I research everything. So how did this happen? I came armed with a list of questions for the breeder. And she lied about every single answer.

The French Bulldog is a Unique Breed

French Bulldogs are an interesting breed. With their larger than necessary heads, most breeders deliver their puppies via C-section. Further, due to the dog’s squatty build, most conceive by artificial insemination. Besides the added care needed to deliver a healthy puppy, there’s also the added expense.

The basic laws of economics come into play here. When you combine a huge demand with a limited supply (and the above-mentioned expenses), you’ll find high prices and/or shortcuts. These shortcuts include puppy brokers, mills, and backyard breeders. The prices of Frenchie puppies have skyrocketed. Expect to pay several thousand dollars for a purebred Frenchie.

Frenchies innately have serious medical problems. With their pushed-in faces, they can suffer from respiratory issues. Their stout bodies and bowed out legs can lead to joint and knee pain, spine deformations, and IVDD (what Baxter had at the end of his life). Not to mention, many Frenchies have dietary and skin allergies. Now add in a puppy mill dog, with heightened hereditary conditions, and it’s no wonder that Frenchies are not the healthiest breed.

The imported Frenchies, the East European French Bulldog (Baxter) look different from your typical Frenchie They have a longer, more muscular body, with a more prominent snout. They tend to be more aggressive, which we did not find with Baxter, but he did bark excessively (not a trait of the American French Bulldog).

How to Get a Healthy French Bulldog Puppy

First and foremost, do your research!

When we started our search again for our second Frenchie, this is what we did:

I initially tried the rescue dog route and I encourage you to do the same. Unfortunately, none of the available dogs fit my lifestyle, either having expensive medical issues or not recommended with young children. Also, after watching my children grieve the loss of their pet, I wanted only a young dog.

Also check out this post where I talk about some great dog rescue organizations.

This post is not intended to diminish the hard work and devotion of dedicated breeders. They are out there.

The kicker is that in the end, I didn’t get a French Bulldog. Well, that’s not entirely true. We got a Frenchton, half French Bulldog and half Boston Terrier. My vet expressed how happy he was that I got this mix. Somehow combining these two breeds usually results in a healthier puppy.

hi i would like to talk to you more about this through email i recently had this experience where the “breeder”actually a broker lied to us about many things about the puppies we just got they’re European frenchies too, told us he got them from ukraine and we picked them up in pennsylvania as well

In my case, they told us the mother was there in PA but we couldn't see her for some reason (I forget why). Only when I asked for paperwork did I question why they weren't AKC (American Kennel Club). We never got a real answer but then we found the info about her on the internet and from some casual conversations on the street form strangers actually who had done business with her. I do remember after she got shut down, she reopened under various names. Feel free to send me an email at [email protected]

There is good information in this blog. I, myself, have had a frenchie, or 4 at one time, in my life for the last 18 years. All my frenchies lived to be 10 to 14 years old with very few health issues. And recently one of my puppies just passed away three weeks before she would have been 15 years old. Unfortunately all my original breeding stock has passed away and I am starting over. There are reputable breeders out there, you just have to look for them.

You're right. They're hard to find but there are definitely great breeders out there. That's a long life for a Frenchie. You were very lucky. They're still my favorite breed. Melt my heart.

I realize this is an older post but it sounded similar to our experience with our English bulldog. We purchased him from Bulldog Ravine in Ravine PA. A few months afterward we learned his "breeder" was shut down for importing pups from Russia. We also got lucky and he live nearly 11 years. Others were not so lucky. Thank you for this article.

Jill, that’s where we got Baxter! How did you find out about them getting shut down? We probably got them around the same time. This was back in 2006.

Im also considering a frenchton. Did you like your breeder?

I loved my breeder. The only negative with a Frenchton is that they are much higher-energy, more like a Boston Terrier. I joined several Facebook groups and searched out breeders (for months) until I got real feedback. If you want my breeder's info, I'm happy to share.

Thanks for sharing these resources!