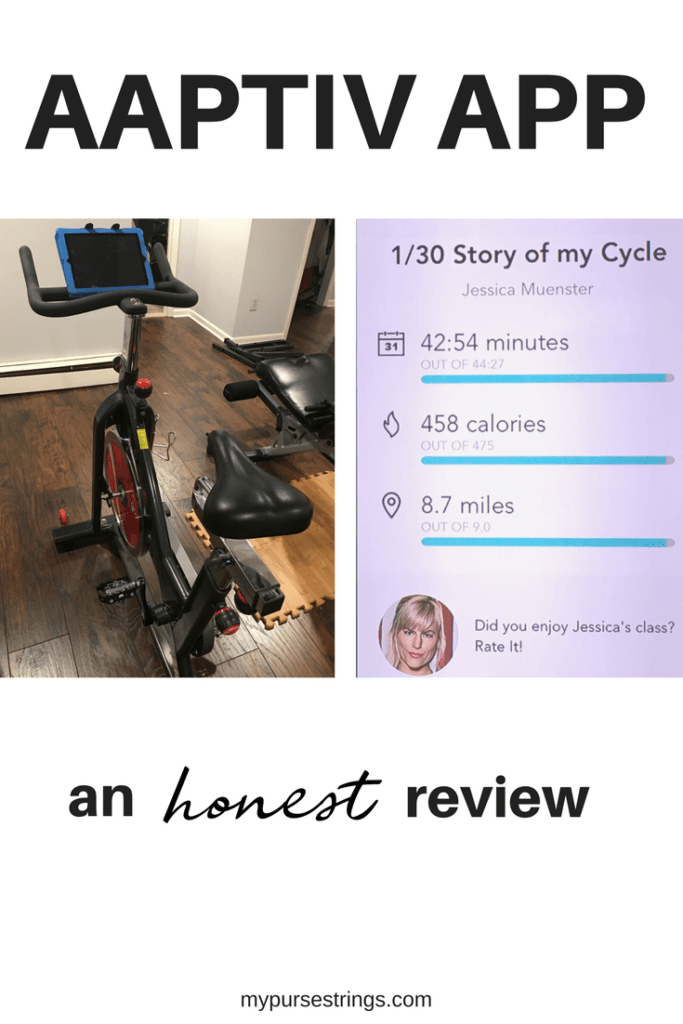 Friends and readers have suggested that I check out Aaptiv (formerly Skyfit). So, for a week, I abandoned my Peloton classes and started spinning with the Aaptiv app on my iPhone.

Aaptiv is a fitness app available on Android and Apple devices. It provides on-demand classes in an audio format, wherein an instructor coaches you through various fitness routines.

Although Aaptiv includes workouts ranging from outdoor running, treadmill, elliptical to yoga, I will focus strictly on its indoor cycling classes.

To use the Aaptiv app, you need a spin bike, your phone and maybe a set of wireless headphones.

Check out some of my favorite and recommended spin items in my Amazon store.

How Much Does Aaptiv Cost?

What Kind of Music Does Aaptiv Play?

Aaptiv focuses heavily on the music. In my opinion, that’s their biggest selling point: fun, motivating music without you having to create your own playlist. Although, I think Peloton has pretty kick-ass music themselves. Both apps have their own Spotify channels. Peloton Cycle has more than twice the amount of playlists than Aaptiv.

How Long are the Aaptiv Classes?

Even though you can filter your workouts by duration, I find many of Aaptiv’s indoor cycling classes to be too short. I can’t understand the purpose of an 11-minute ride. Lately, I take a lot of 20-minute Peloton HIIT rides which leave my heart racing and my body exhausted, however, Aaptiv’s under 30-minute rides lacked that same intensity for me.

What’s the Style of the Instructors like on Aaptiv Spin?

While using the Aaptiv app, I often felt like I was riding a stationary bike and not a spin bike. In a couple of classes, I sat in the saddle for the entire ride. Only in one of my Aaptiv classes did the instructor really move me out of my seat with jumps. While Peloton’s tap backs and other movements truly engage my core with proper posture and control, I couldn’t help but think during Aaptiv’s repeated jumps, “this can’t be good for my neck.”

Do the Aaptiv Spin Classes Use Weights?

Peloton Cycle and numerous other boutique studios incorporate weights into their classes. Aaptiv made no mention of weights during my rides. Depending on your view of the usage of weights during a spin class, you may appreciate their absence. I rather look forward to the weights portion of the class.

Do the Instructors Call Out Metrics During the Class?

During most of my rides, the Aaptiv instructors rarely mentioned cadence. Despite this omission, I kept my Wahoo app open to measure it. But, without the instructors giving me a cadence range, I found it difficult to assess their expected exertion levels from me.

Furthermore, the verbal cues the Aaptiv instructors gave regarding resistance confused, rather than guided me:

Just enough to get a good flow

Add a little bit of resistance. . . more challenging but not too challenging

In Peloton classes, the instructors refer to resistance by specific numbers or a percentage, such as a fifty-percent or more.

My gut tells me that the Aaptiv app lends itself more to running and elliptical workouts. I can see how the music and instruction could motivate a runner. As a visual person, I like to compare my body position to that of the instructor and/or riders around me. To ensure that I am working to my full potential, I appreciate the instructor calling out metrics numbers (resistance, speed, and cadence). I think I would feel similarly taking Aaptiv’s yoga classes although I have yet to take them.

Granted, had I never discovered the Peloton app, I believe that I would have had a more favorable review of the Aaptiv app. But Peloton has completely stolen my heart. This is how I describe it: Imagine a  girl has a boyfriend she’s sort of obsessed with named Peloton but they take a break (“Friends” style) and she starts dating Aaptiv. But she can’t stop thinking about Peloton, even while she’s with Aaptiv. She soon realizes that Peloton has it all: fun, great music, motivating instructors, classes of all levels and durations. At the end of the week, she ends it with Aaptiv, promising to remain friends.

Would I ever use Aaptiv’s Indoor Cycling workout again?

Probably. Aaptiv requires a lot less setup than Peloton. If I wanted to use a spin bike in a gym or a hotel, I might favor the Aaptiv app over lugging along a cadence sensor, iPad holder and iPhone. I have to admit, despite its limitations, I did sweat, especially during Kelly Chase’s Cycle Pop HIIT ride.

Have you tried either app? What are your thoughts?

I recently updated the Peloton App blog post with that new information. It just went up for new subscribers. However, the Peloton app has improved greatly in the last month. You now have access to not just spin classes but boot camp, outdoor runs and walks, and the beyond-the-ride classes. You can all the classes, live and on-demand that you would use on their Treadmill, the Tread.

Holiday Gift Guide for the Work From Home Peeps - MyPurseStrings.com

[…] your core, many people who work from home also work out at home, like me. Be sure to check out my fitness-related posts. More fitness posts are coming soon so please subscribe to my blog and you will get automatic […]

New favorite ride for me is CycleCast audio and BitGym video! I've ridden up and down the CA coast, ridden through the streets in Switzerland and this morning, enjoyed fall foliage in New England! Will be interested to hear your reviews!

Does the Peloton app have the scenic rides that you can get on the Peloton bike, or does the app only offer the spin classes? Thanks and God bless!

Thanks for asking. Great question. As far as I know, the app does not offer scenic rides. However, since I started using the app, there have been many improvements, such as the ability to create a username and to bookmark rides. I would not be surprised if they added this feature in the future. But to answer your question more fully, you can access more than just the spin rides on the app. All of the Beyond the Ride classes are available with an app subscription, including stretches, cardio, yoga classes, etc. There are also Pro-Cyclist rides, which I have not taken, but they too are on the app. I often update this blog post to reflect new information so please subscribe to my blog or follow me on social media and I will let you know if I learn anything new.

Does Peloton has a FAMILY account? My wife and I are both interested in using but I am only willing to pay for one subscription.

I'm still working on my husband to get him to try the app. I know that people share the app, so I just looked up to see how: https://support.pelotoncycle.com/hc/en-us/articles/217510346-How-do-I-share-my-Peloton-Subscription- Basically, you open the app, go to monthly subscription, click on that, and then add an account. From there, you create another user name. I just tried it and it seems easy enough. Also read this: https://support.pelotoncycle.com/hc/en-us/articles/204712579-Can-I-purchase-more-than-one-access-plan-at-a-time-